From Edison cylinders to pre-amps to ProTools: talk about it here.
Post Reply
12 posts • Page 1 of 1

For those who don't know, Ed Saunders is one of the main places on the 'net these days to buy cartridges and styli, at least for certain brands. I got my cart from him a few years ago, and things were fine. However, right now he's got another one (Audio Technica 8008/331LP) up on eBay. The listing does say "Refurbished", but it's unclear exactly what's been "refurbished". The kicker is this line, though: "NEW genuine AT Shibata or Line Contact diamond stylus (Choice of winning bidder)". Now, Audio Technica no longer makes this cartridge, nor do they still make Shibata or Line Contact styli that will fit it (the original came with a line contact stylus). It's unclear what this means in the listing. I wanted a backup cart/stylus, so I asked:

Luke Pacholski wrote:You mention: NEW genuine AT Shibata or Line Contact diamond stylus (Choice of winning bidder). In the picture there are two styli. I know the red one is the LC stylus; is the white one the Shibata? What is the model number for that stylus? As I know these styli are no longer produced, how are they new? Thanks. 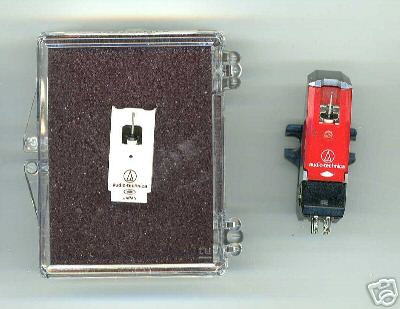 I got this back:

Ed Saunders wrote:The redone pictured is the original and now ruined stylus that shipped with the 8008.

I don't know about you, but that makes no sense to me. The stylus in the photo is ruined?

Luke Pacholski wrote:Are you saying this won't come with a working LC stylus then?

That was met with:

I thought it was worth it to keep trying though, as these carts are fairly hard to find. Since I've seen various listings for styli that don't seem to be made to AT, I pressed the issue:

Luke Pacholski wrote:Could you then please clarify what stylus (or styli) come with this cartridge? You say they are "new". Are these new old stock? Are they AT styli, or aftermarket?

Somehow my questions prompted this:

Ed Saunders wrote:All the information you are asking is clearly in the auction listing written in plain and easy to understand English. If you would stop trying to re-write what I have said and just simply read, you would do a lot better. It's really of little matter, though as I have already blocked you from bidding on ANY of my auctions FOREVER.

Umm...ok. I thought I'd keep trying, though. I was of course a bit frustrated as well.

Luke Pacholski wrote:I don't know what your problem is. All I'm trying to figure out is what exactly you are offering. "NEW genuine AT Shibata or Line Contact diamond stylus" is not clear as 1) AT no longer makes such styli, and 2) it's unclear if "genuine AT" refers to both the Shibata and LC styli, or just the Shibata. The fact that the photo you show is apparently of a broken stylus adds to the confusion.

If you're going to be such a jerk I'll just take my money elsewhere, but I
purchased my last cart from you and was prepared to do so again. Good day.

That was met with:

You know more than I do despite my 30 years in the business and my family's being in the recorded music business since 1906. So take your vast knowledge, your condescending attitude and your money elsewhere.

You'd think if he was in business that long he could answer a couple of simple questions. I ended with:

Luke Pacholski wrote:How is it condescending to ask questions about an item before buying?

But I don't expect a response.

It's worth noting that a friend of mine recently purchased a cart from Saunders. It was described as being "new", yet when my friend put it down on a record it was clearly damaged. He should have complained, but still wanted the cartridge (to use with other styli) and didn't want to bother.

I also found this:


It certainly seems like he's taking used items and either branding them as "new" or avoiding getting into where they actually came from. And on top of it he's crazy.
"I know because it is impossible for a tape to hold the compression levels of these treble boosted MFSL's like Something/Anything. The metal particulate on the tape would shatter and all you'd hear is distortion if even that." - VD
Top

I bought one of those Audio Technica 8008, or one of the 8000 series from Ed S. on ebay. The Studio Reference series I think it says on the card in the plastic box. That was a few years ago. It was something like 49.99 "buy it now".

Six months later, I emailed him directly for price of replacement stylus, and he came back with $89.99 quote. That was the last time I bothered with him.

After searching for a replacement stylus all over the place, and not seeing even that cat. # listed in many AT lists, I realised I bought a close out, or cart made for a certain TT or something odd like that. Out of print.

So I did some research on the internet and asked some friends who they use. I came upon Garage-a-Records. Bought the AT 440ML and never looked back at ES. I later decided to try out a 89.99 Grado with specs that are as good as the two later AT I bought. Don't know about specs, but it was the worst sounding cart I have heard in many years. A very boxy and fatiguing pos.

Ow, I found an old un-used AT stylus I had left over from some cheap models I used a few years back. It is not the line-tracker, but a black plastic colored one, anyway, it fit the 8008 from Ed S., so I gave that to a friend for his TT which needed an upgrade. Nice to give gifts to friends like a new stylus with good (but very out of production) cart.

So anyway, Luke, you could get a stylus for that cart for 18.00 if you wanted to still use it for some records. I would expect the sound to be about almost as good, just tracking might not be quite as good.

But thanks for that sorry story, and it sounds like I did the right thing to blow off that jerk.

One thing to sell outdated carts, used carts, over priced styli, but used merch is the lowest. You could have filed a claim with ebay or paypal?
Top

Oh, not that I would buy from that jerk again, but this is the cart with that black stylus. I managed to drop this 18.00 needle into the AT 8008 for another lease on life. You might want to grab one from Garage-a-Records, and use that 8008 with it for those lesser condition records.

Jeff T. wrote:So anyway, Luke, you could get a stylus for that cart for 18.00 if you wanted to still use it for some records. I would expect the sound to be about almost as good, just tracking might not be quite as good.

Well, the whole attraction of the 8008 is the line contact stylus, so while others fit, they kind of negate the point.

FWIW, the 8008/331LP was discontinued maybe 3 years ago. I think I got mine just before they stopped making them. If I would have known all of this at the time, I would have gotten more than one or some replacement styli or something.
"I know because it is impossible for a tape to hold the compression levels of these treble boosted MFSL's like Something/Anything. The metal particulate on the tape would shatter and all you'd hear is distortion if even that." - VD
Top

I mentioned it to SH. He didn't know if it would be kosher or not (that's a story in and of itself). I never bothered to test the waters.
"I know because it is impossible for a tape to hold the compression levels of these treble boosted MFSL's like Something/Anything. The metal particulate on the tape would shatter and all you'd hear is distortion if even that." - VD
Top

lukpac wrote:I mentioned it to SH. He didn't know if it would be kosher or not (that's a story in and of itself). I never bothered to test the waters.

Why would it not be kool for that experience to be posted at SH site?

Is there politics and deep rooted business relationships all over ebay as well as the sad sinking major label record industry?

I can understand why they would not want to have owners of recorded masters being bashed, but a peddler of cactus needles and sewing pins out in some distant galaxy is a bit far fetched no?
Top

Little girl, do you wish to buy a line contact stylus out of the back of Grover's white van? It's van den Hul-riffic!
Chuck thinks that I look to good to be a computer geek. I think that I know too much about interface design, css, xhtml, php, asp, perl, and ia (too name a few things) to not be one.
Top

Who is "Grover" anyway? If I may ask.
Top

Not sure how up to date this thread is but I've just found it; sounds like that Mr Saunders is in no rush to win any new customers.
A good source for styli which I use is Mantra Audio in the UK;free postage in the UK, and they do international mail order and I expect shipping costs won't be too immense for a stylus or cart package.


Yeah, Mantra Audio are alright, I've bought from them. I can't recommend the Audio-Technica AT110E cart (which they stock, I believe it's something of a EU-only model) enough.
Top
Post Reply
12 posts • Page 1 of 1